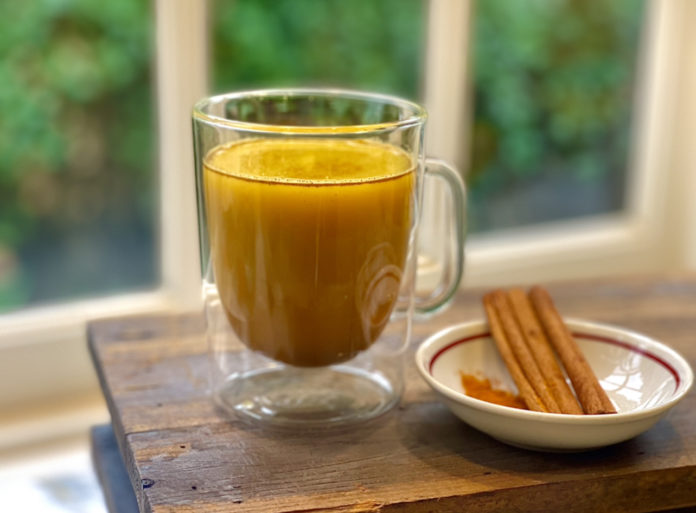 Chronic inflammation in the body has been linked to almost all of the Western diseases, including “heart disease, cancer, metabolic syndrome, Alzheimer’s and various degenerative conditions.” (source) Cutting down our chronic inflammation can play a big role in minimizing our risk for these diseases. Turmeric, particularly the compound “curcumin” found in turmeric, has been shown to do just that. In fact, curcumin’s anti-inflammatory effects seem to be almost as effective as some prescription anti-inflammatory drugs.

Another powerful benefit of curcumin is its antioxidant properties. We know that antioxidants are key in fighting back against free radicals which cause oxidative damage to our cells, damage which will eventually lead to aging and disease. In our modern world, and especially if you live in a big city, free radicals are difficult to avoid. We can take in free radicals through the food we eat and the air we breathe so the more antioxidants we can slip into our system to combat the damage these might cause, the better!

Curcumin also boosts our brain health, and we are all about brain health here at AGEIST. Curcumin increases a growth hormone in our brain called BDNF, which increases the growth of new neurons in the brain. Studies have linked decreased levels of BDNF in our brain to brain disorders like Alzheimer’s and depression. (source)

Needless to say, the health benefits of turmeric are immense. However, turmeric is not easily absorbed by the body. To increase the bioavailability of curcumin in turmeric, take turmeric with fresh cracked black pepper and a source of fat.

Method
– Add all ingredients to a small saucepot and stir until combined and warmed.
– Serve in your favorite mug and enjoy!

Taylor Marks
Taylor Marks is a certified holistic health coach and current student at The Institute of Culinary Education studying health supportive culinary arts. Her passions include making nourishing food taste and look delicious and guiding others towards feeling their best.