Christine Roesch recounts her expedition to Antarctica, including the challenges, beauty, and exhilaration of the trip 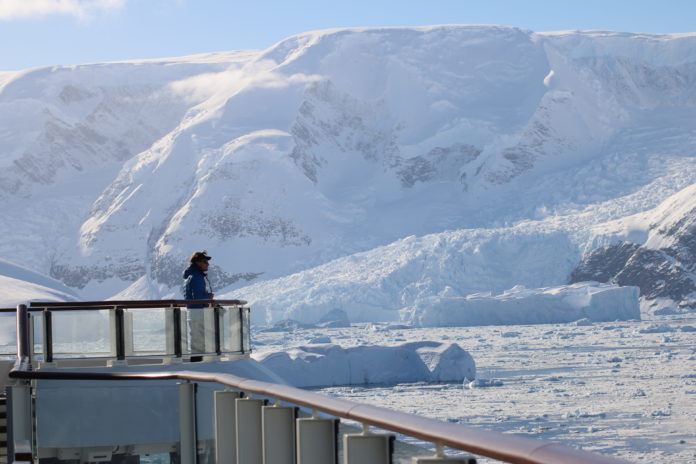 I was born curious. It often makes me leap into the unknown without a parachute. I make no excuses because I can’t change the primary template of the person I am. Add a splash of independence and I’m easily persuaded by an unexpected opportunity that I hadn’t thought about. Leaping into the breach on a whim, I am rarely disappointed.

Antarctica was NOT on my bucket list. I’d read some of those accounts of explorations hundreds of years ago and they sounded brutal and death defying. I’m seventy-six years old — why would I want to go to such an inhospitable place? But my friends, Trudy and Ann, both in their sixties, had been there four years earlier and wanted to go back. Really? “Yeah,” they said. “It’s the most spectacular place on Earth. Come with us.” Getting away to a place without Covid was tempting. Why not?

Traveling to remote areas has changed from days of old. Going to Antarctica would be on the Lindblad/National Geographic Endurance, their newest icebreaker, with about 100 adventurous types, mostly retirees, and a slew of naturalists, because, at our age, we are still learning. There is nothing like immersing in nature to teach us new ways to look at ourselves and the world we live in. I’ve always thought of nature as a great source of knowledge.

In this age of Covid, it’s not easy to get there. The pandemic added a complex wrinkle to traveling anywhere. We underwent numerous negative tests and strict protocols. The ever-changing political climate of countries closing their borders made long flights from Miami to the southernmost town in the world, Ushuaia at the end of Argentina, even longer. Once there, the two-day sea trip to Antarctica was also daunting.

At the end of South America, the Drake Passage is where the Atlantic Ocean meets the Pacific in a clash of currents coming together with the force of two Titans doing combat for dominance. During the night, there were a few times when I woke up hugging both sides of the bed as the ship lurched and bucked through the thirty-foot waves and forty-knot winds, with grinding sounds that could wake the dead. And yet, we were sailing in the most modern icebreaker with stabilizers to reduce the roll and a new X-bow design that slices through the waves, shortening pitch. I can’t imagine how it must have been on the smaller wooden ships of old.

Calmer waters announced our arrival into the Southern Sea. As we looked out our windows, we had entered a monochromatic world of white snow and ice. Jagged black mountains, glaciers streaked with aquamarine and floating icebergs backlit in turquoise and sapphire blue created an effect that was dramatic on a large white canvas.

For our expedition into this glacial landscape, we were outfitted with a bright orange parka with liner. We were advised to wear layers depending on the weather, which hovered around freezing. By the time we put on an undershirt, sweater, vest, parka, rain pants, boots to navigate the wet landings, hat, gloves and lifejacket for the short ride in the zodiac; hampered by our cameras, iPhones and dry bags, we walked as stiffly as giant orange penguins.

Getting ashore was also a learning experience. With help from the crew, we hoisted our legs over the zodiac’s plump sides, splashed into the water, and walked ashore on pebbled beaches or climbed onto ice and snow, feeling like explorers imprinting our first steps onto an unknown continent.

To our delight, we often had a welcoming committee of penguins coming down from their nesting sites on high. Curiosity goes both ways. We were advised to keep fifteen feet between us, and always give them the right of way. Yet, although we tried to comply, they often had other ideas, coming to investigate these giant orange penguins suddenly appearing in their midst.

Penguins were everywhere we landed. It was spring, with a lot of sex on the beach and Gentoos, with red beaks that look like they are wearing lipstick, laying on nests of pebbles incubating their eggs. The males were busy stealing pebbles from other nests to bring back to theirs to seal the bond with their mates, as if to say, “I’m here for you.”

One of our naturalists said, “You come here for the penguins, but you come back for the ice.”

We always think that ice and snow are white or transparent, but the icebergs and glaciers of Antarctica reflect the blue light spectrum, sometimes in dramatic fashion.

We sailed by massive white slabs of tabular ice broken off from the ice shelves surrounding the continent. Unique to Antarctica, these flat-topped giants wander about to slowly dissolve over the years. Some are a mile or two long and as high as a four-story building.

This was not a cruise or a leisure vacation, this was an expedition to teach us about our vanishing wilderness. We were willing students, there to learn from thirteen naturalists to be ambassadors for the natural world. Everywhere we went, we saw evidence that our earth is warming up. As we explored this untarnished, uninhabited place, we were struck with the obvious that our world was changing.

This was not a cruise or a leisure vacation, this was an expedition to teach us about our vanishing wilderness

Glaciers are receding. The ice shelf that surrounds most of Antarctica is breaking off and floating away. It is losing three times more ice than 25 years ago. As the ice recedes, the more adaptable Gentoo penguins are taking over the places that were unique to Adelie and Emperor penguins who live, breed and raise their chicks on ice. In this pristine environment, away from human contamination, seeing that this incredible beauty is disappearing was both shocking and sobering.

We, as humans, try so hard to put ourselves into a concrete, steel and glass bubble to shelter safely from the elements, that we disconnect from what is real. Nature is seen as an impediment that needs to be harnessed, plundered, and tamed. But, by thinking it is the enemy to our way of life, we alienate ourselves from our origins. And yet, when we reconnect, it is a source of unexpected bliss.

Christine Roesch
Christine Roesch, 76. Navigating a series of unexpected and abrupt life changing events has kept Christine moving from one place to another throughout her years. From immigrating to the U.S. at the age of eight, a busy career writing and educating about nutrition, (and so many others in between), to living the cliché of retiring and moving to Florida, she has had to learn adaptation. That’s where adventure lies—taking chances and going beyond the fear of change. The reward is rich years lived with more to come.

The Art of Retreating on a Greek Island